Since phones have taken over it seems to me that people are reading less in public spaces. My children and I flout this at every opportunity. On a trip to the shops all three of them can often be seen trailing behind me, book in hand. (No one has met with calamity yet.) If I know I’ll be wasting time in queues, I’ll stuff my current novel into my bag before I leave home. But then as I stand in a line of people bent over their phones, I often feel almost mournful. Perhaps those either side of me are reading ebooks, but their scrolling fingers suggest otherwise. And I wonder, are we losing the art of reading? Are people reading less? Are we so spending so much time on social media that we are no longer taking time for deep reading?

A 2016 Nielsen report puts average media consumption (social media, TV, radio and all electronic devices) at 10 hours a day. How is there time for anything else? And in 2016, a National Endowment for the Arts survey found that only 43 per cent of American adults had read ‘a work of literature’ for pleasure in the previous year. That stat depresses the hell out of me. More than half the country hadn’t read even one book in a whole year. That’s 163 million people who didn’t pick up a book for pleasure.

Anecdotally, the word from my children about their classmates’ lack of interest in recreational reading doesn’t paint a rosier picture. Last week Miss 15 reported that her English class complained volubly about a Roald Dahl short story they were asked to read. It was too long, they all said. Miss 15 rolled her eyes as she recounted this. It was 10 pages. END_OF_DOCUMENT_TOKEN_TO_BE_REPLACED

An airport ottoman made for reading.

It worries me, this state of affairs. Not just because I’m a writer and editor, but because we need to be growing imaginative thinkers. Reading gives us space and time for reflection. Books are places where ideas germinate, where empathy is built, where questions are asked, and popular narratives are interrogated. In other words, with all the challenges our world is facing right now, we need books more than ever.

So won’t you join me in bringing books into the public arena at every opportunity? Read wherever you find yourself, be it in a queue or on a bus or waiting for a plane. Let’s stop scrolling and instead cram books into every corner of our lives. I’ll wager we’ll all be the better for it.

And maybe, just maybe, we’ll encourage someone else in that queue/bus/airport lounge to put down their phone, and pick up a book.

Success is a funny thing, particularly in an era where you can be famous for doing absolutely nothing. Kardashians of the world aside, writers mostly seem to have a complicated and uncomfortable relationship with success. They often crave it, and yet when it arrives they feel undeserving.

There are multiple ways to define literary success: critical acclaim, fame, making the bestseller list, selling into multiple territories, translation rights, garnering the respect of peers, invitations to speak at festivals and high-profile events, and so on. Recently as part of Festival Muse, I chatted with Robyn Cadwallader whose historical fiction book, The Anchoress, has been an extraordinary success any way you cut it. We had a generous and thoughtful crowd (characteristic of Muse audiences) and our discussion was wide-ranging. I particularly enjoyed Robyn’s insightful comments on feminism in historical fiction (which you can read about over at Whispering Gums). But I want to dwell briefly here on our conversation about success.

END_OF_DOCUMENT_TOKEN_TO_BE_REPLACED

The Anchoress has been published across Australia, the UK and US, and translated into French. I remember being in Sydney airport shortly after the book came out and seeing a huge billboard with Robyn’s soaring swallow and thinking, ‘Wow, she’s entered blockbuster territory.’ Marie Claire described The Anchoress as ‘the book that the whole literary world can’t stop talking about,’ and yet when I asked Robyn about how she has navigated the book’s success she spoke of her ‘self-doubt’ and how easy it is to focus on the criticisms, rather than the compliments. She described it as being like ‘walking into a head wind, you just have to keep on going’.

We touched on Imposter Syndrome, so prevalent in writers, particularly female writers, who fear that they are going to be found out as a fraud. That their success has not come about by virtue of their ability, but through luck or error. The first time I came across this idea was in a TED talk by another historical fiction sensation, Hannah Kent. Her debut novel, Burial Rites, was sold in a million-dollar two-book deal. The stuff of dreams. And yet in this talk she opens by saying, ‘I spend most of my time deeply terrified that I don’t know what it is that I’m doing.’ She goes on to say, ‘I’m convinced that I’m not as capable as other people think that I am, and that it’s only a matter of time before everyone works out that I can’t write to save myself.’

In another TED talk, Elizabeth Gilbert of Eat Pray Love fame (who incidentally loved The Anchoress) speaks about how great failure and great success can be equally disorientating. Both catapult you so far from yourself that ‘there’s a real danger of getting lost’ and having to find your way back home. In Elizabeth’s case her ‘home’ was writing.

Success, as the cliché truthfully goes, is a double-edged sword. ‘I had succeeded beyond my wildest expectations,’ Elizabeth says. ‘I had to find a way to make sure my creativity survived my own success.’ Clearly she managed to do just that, her elegant novel The Signature of All Things proof enough. Hannah Kent has recently released her second novel, The Good People, (currently in my To Read pile) and it is also enjoying an overwhelmingly positive reception. Meanwhile Robyn Cadwallader is working away on her second novel about an illuminator set in fourteenth-century England. I wish her all the highs of success, and none of the lows.

With Chanel Cole at the awards

Twenty-three has always been my favourite number. I was born on the 23rd. In my 23rd year I graduated from university into this writing and editing life. And last night at the 23rd annual Canberra Critics Circle Awards I picked up an award for The Invisible Thread.

Earlier that day I had been preparing documentation for the Centenary of Canberra summarising our year of achievements. Most importantly, of course, there is the anthology itself. A collection of 100 years of fiction, nonfiction and poetry by 75 writers with a connection to Canberra. The book has been enthusiastically received by both readers and critics, with Australian Book Review calling it ‘a captivating collection’ and Whispering Gums concluding that The Invisible Thread ‘should be on every Australian bookshelf’. I can’t think of a better endorsement than that!

In addition there have been a series of video interviews with Invisible Thread authors, a book trailer, an animation of Judy Horacek’s illustrations, eight incredible events featuring so many of our authors, and the creation of the ACT Writers Showcase website, the first site of its kind in Australia.

Needless to say it has been a busy and wonderful year. I’ve had the good fortune to share it with the dedicated anthology Advisory Committee and all the authors who make The Invisible Thread such a special book. And to receive a Canberra Critics Circle Award is a grand way to top it all off, particularly given that it was alongside Thread authors Lesley Lebkowicz (for The Petrov Poems) and Robert Macklin (for Dark Paradise), as well as that super talented crew from Scissors Paper Pen.

To read about the full list of award recipients across all art forms see this article in The Canberra Times, and for photos of the night click here.

Subscribe before 5 pm on Sunday 9 May to go in the draw to win a signed and dedicated copy of my debut novel, The Breaking. Australian residents only.

Congratulations to Amanda McLeod and Fleur Johnson who won the previous giveaway of Kate Mildenhall’s The Mother Fault. 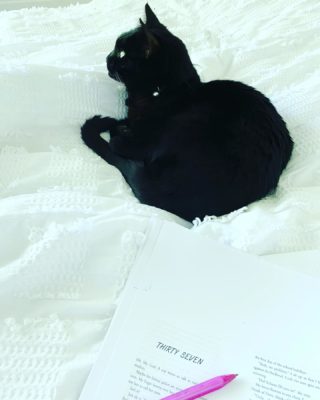